The Flow network was designed from the ground up as the foundation for a new digital economy. An economy that is owned and governed by its participants.
‍
The ethos, architecture, and token economics of the Flow network as a whole are covered in previously published documents:

The FLOW token is the native currency of the Flow network, ultimately required for the network and all the applications on top of it to function. FLOW is designed as a payment method as well as long-term reserve asset for the entire Flow economy. The token is a low-inflation and low-circulating-supply asset that is used by validators, developers, and users to participate in the FLOW network and earn rewards. It is also used to transfer fees, serve as collateral for secondary tokens on Flow, and to participate in future protocol governance.
‍
In the FLOW Token Economics paper, we outline the key principles of the FLOW token: diverse use-cases, broad distribution, and minimal monetary inflation. This paper will focus exclusively on the launch of the Flow network and concurrent distribution of the FLOW token.
‍
While the network is fully functional and the tokens have immediate utility in NBA Top Shot as of day one, all tokens distributed to backers, team members, or the community start fully locked up and can only be used for purposes of staking for at least 12 months. During this period, staking rewards are freely transferable and represent the only circulating supply on the network.
‍
All lockup and transfer restrictions begin at the same moment, making sure pre-launch investors, dev team members, and the early community are all on equal footing. . We have endeavored to be as transparent as possible with respect to these details to provide the best understanding and develop the highest confidence across the community as possible.

The Flow Beta Mainnet began operating as of May 15, 2020. On June 15, we invited the first cohort of beta testers into NBA Top Shot. NBA Top Shot was the first application launched on Flow – proving the network’s functionality and business value through real usage.
‍
During Phase I, the network has been operating without a token or staking rewards – users have been primarily using credit cards and non-FLOW cryptocurrencies for payment, and validator node partners have been running their systems without compensation in preparation.

At the start of this Phase, 1.25 billion FLOW were created. While the network is fully functional and the tokens have immediate utility, all tokens distributed during Phase II will remain fully locked up for one year. The lockup and transfer restrictions begin at the moment of token generation, making sure pre-launch backers, team members, and the early community are on equal footing.
‍
For transparency, the breakdown of holders at genesis block is outlined below:

Prior to launch, Dapper Labs closed approximately $24.6M in funding via convertible notes expected to convert into FLOW tokens. All tokens set aside for conversion purposes to pre-launch backers are subject to the same terms and lockups: 24 months with a one-year cliff.
‍
Convertible note backers include the world’s top experts in crypto and entertainment including a16z crypto, Union Square Ventures, Coinbase Ventures, Samsung NEXT, Fenbushi Digital, Accomplice, Venrock, Blockchange, Distributed Global, BlockTower, Valor Capital, and Warner Music Group, as well as leading figures in sports, music, and gaming.
‍
No matter the investor, we kept an eye towards increasing decentralization and limiting individual ownership. Backers that own at least 10M FLOW tokens at Genesis include:
‍ 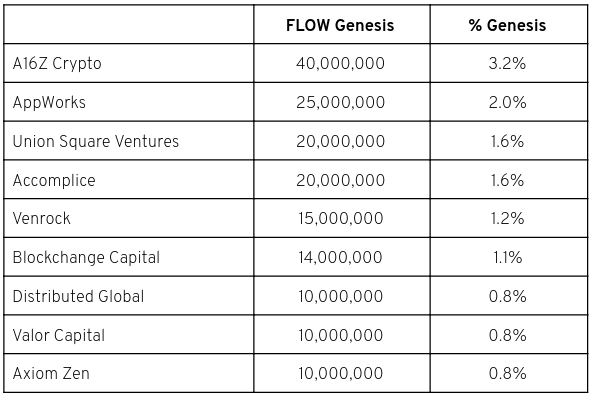 We also made it a priority at every turn to onboard community members, content partners, and backers from our community to be part of the Flow ecosystem. Angel investors who are part of the Flow mission include William Mougayar, Bill Tai, and Don Mattrick, as well as NBA stars Andre Iguodala (Miami Heat), JaVale Mcgee (Los Angeles Lakers), Spencer Dinwiddie (Brooklyn Nets), and Aaron Gordon (Orlando Magic), among 20+ other founders and chief executives.

350 million FLOW tokens have been set aside for ecosystem development to help bootstrap network effects and ensure a diverse and accessible community over the long term.
‍
Recipients of Flow ecosystem support include entrepreneurial support organizations, non-profits, and academic institutions including Berkeley, Purdue, UC Davis, and Rochester Institute of Technology. These groups share FLOW credits with their communities and broaden accessibility.
‍
Flow ecosystem development programs are designed to reward the efforts of a decentralized community building sustainable value – not speculation. As a result, FLOW tokens distributed through these programs in the first year will be subject to lockups and transfer restrictions that expire no sooner than the first unlock date applied to early backers and the team. Ecosystem development programs also include token leases for purposes of staking, allowing reputable community organizations to participate in the network and earn rewards.

Flow has been developed and brought to market by one of the most innovative and interdisciplinary teams in the world. To date, approximately 95 million FLOW tokens have been granted as incentives or compensation to the ~90 individuals from Flow, Dapper Labs, and other firms responsible for building Flow and associated tools and applications to date.
‍
Development team awards vest over 3 years with a one year cliff, ensuring all stakeholders are aligned. Flow team members will not receive tokens in advance of any other network participant.
‍
An additional 130 million tokens are set aside for ongoing grants to support the development of the Flow network and fund ongoing contributions to Flow core as well as other open source components of the Flow ecosystem. All grants from this allocation, once granted to their recipients, will have a three-year vesting period as above.

As the corporate entity that funded the development of the Flow technology, Dapper Labs has been allocated 250 million tokens which it intends to hold as part of its long-term treasury.

Guided by discussions with our early validator community, December 15 is the estimated date when Phase III begins and validator rewards are enabled on mainnet.
‍
At this time, validator rewards will begin being distributed to staked nodes. These reward tokens will be liquid for use on the network as soon as they are withdrawn by the node operator.
‍
On Flow, 100% of inflation is distributed to stakers – meaning holders of Flow will not be diluted as long as you are actively participating.  In other words, new issuance is only distributed to validators staking and performing work to support the network, or delegators directly pledging their tokens against a specific validator’s dependability.
‍
The only circulating tokens in the first year are expected to be from rewards paid to validator node operators that are staking their tokens. As a result, Flow will have an elevated inflation rate at launch to kickstart liquidity and increase accessibility to the token. While the community will ultimately be able to adjust reward parameters, an indicative inflation schedule is shown below.
‍

The expected staking percentage is expected to decline over time as additional use cases become available, such as infused tokens. As this occurs, Flow is designed to minimize inflation and will optimize this against providing sufficient rewards for validators.
‍
Over the long term, Flow is designed to limit new issuance of FLOW tokens as much as possible, with a total target pool established to pay to validators consisting of i) transaction fees paid to the network; and ii) new FLOW tokens instantiated. New issuance is offset by the fees collected by the network. Because of this, high levels of transaction throughput results in lower annual issuance.

The table below shows an indication of circulating supply over time as tokens unlock and new tokens are issued to validators.
‍
It’s important to note that circulating supply in year one is expected to come from staking rewards paid to FLOW token holders who are either staking their token directly or through an approved provider (such as CoinList). These rewards will be paid in proportion to the amount staked and will be freely transferable after being claimed.
‍ 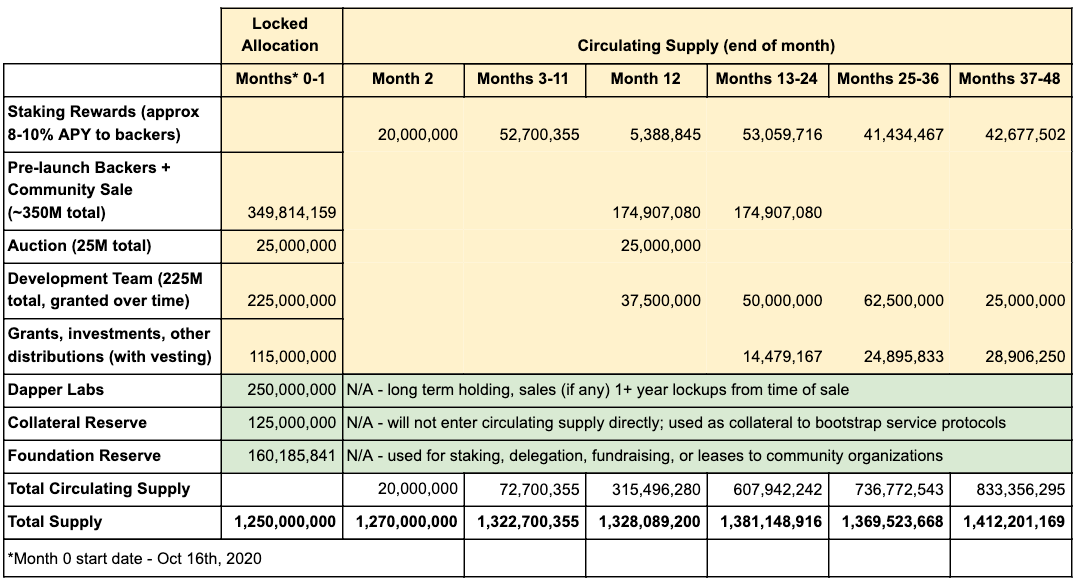 Figures represent theoretical maximums (i.e., Total Supply assuming max inflation, where none is reduced by collected fees) and may be rounded for presentation purposes. The difference between circulating supply and total token supply are the Dapper Labs allocation of 250 million tokens which are held in our long-term reserve and cannot be sold without lock-up periods, as well as the portions of the ecosystem fund such as the collateral reserve and the Foundation endowment (approximately 250 million total) that similarly will not enter direct circulation.

Thank you! Your submission has been received!
Oops! Something went wrong while submitting the form.